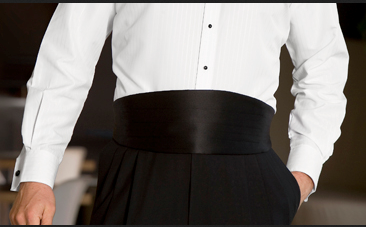 The cummerbund, widely mispronounced and underappreciated, remains one of the more traditional elements of a tuxedo.

Though it’s now considered a rather old-school tuxedo accessory, there is a lot to be said for cummerbunds.

Let’s take a brief look at the history of this unique formal wear piece. 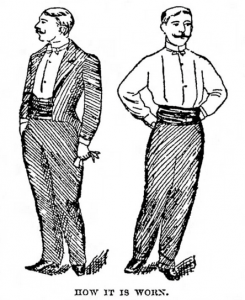 British military personnel based in India adopted the cummerbund from the locals in the 1800s.

It was originally called a kamarband, a term that means “waistband.” As you could probably guess, it got this name because of its simple design as a sash around the waist.

Imagine wearing a full uniform in the dead of summer in India. It sounds unbearable, right? The British felt that way too, and decided to swap out their vests for the cooler sash.

That sash was for dining, too.  The cummerbund was used to keep a little cooler, but it was also used to catch crumbs!  Since it was part of their formal dining uniform, the cummerbund could also have been called the crumb-catcher. 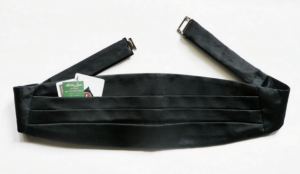 The cummerbund helped minimize layers while keeping the look of sophistication. Both vests and cummerbunds cover the area where shirt meets pants, allowing for a nice clean cut with no shirt bunching.

So even though you might think they’re out of date, don’t rule out the cummerbund just yet. Keep them in mind when looking for your truly classic tuxedo.

Darianna Bridal & Tuxedo carries cummerbunds in approximately 25 different styles and colors.  Many are timeless classic satin looks, while others are specifically designed to be paired with matching bow and longs ties.

Darianna Bridal & Tuxedo has everything from the most formal tuxedo styles with tails to the casual suit with suspenders, for rent or purchase.

With over 100 tuxedos and suits to choose from, over 1,000 color combinations of vests, long ties, bow ties, cummerbunds, and suspenders and 12 different style and colors of shoes, you are bound to find exactly what you are looking for.  Whatever look you’re going for, let us dress you up.